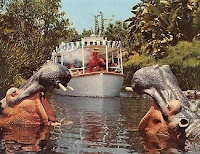 The year that Disneyland and I were both eleven years old I was blessed with a rare vacation from Illinois to California. It was the only one of its kind for our humble family, eagerly anticipated and long remembered. My parents were older, approaching their fifties in an era before health clubs and fitness crazes. They were old beyond their years, and were utterly worn out by a long day in the Magic Kingdom.

Early in the afternoon we headed for the Jungle Cruise, an attraction that was an engineering triumph in the mostly desert-like conditions of Anaheim. Our boat, an African Queen knockoff, was piloted through lush transplanted palm trees and tropical foliage along shores populated by animatronic beasts unlike any that had been seen before. Joking boat pilots recited from a scripted series of silly puns, real groaners, that have now become an expected feature of the decades old attraction.

Modern park-goers continue to enjoy this adventure, albeit a culturally sanitized version devoid of racial stereotypes and cruelty that we never even questioned at the time. How the world has changed! But I’m here to confess my gratitude for having taken a cruise through the early Disney jungle as an uninformed child. I would cringe now were I to voyage deep into 1960s lore.

You see, I belong to the Sierra Club and am, if not an animal rights activist, at least a strong believer in the very necessary changes made to the Jungle Cruise and within our culture in general. I have trained dolphins in Hawaii for Earthwatch and love the varied wildlife in our Florida canal. But I’m here to say, the best part of the ride when I was eleven was…

…when they shot the hippo!

There, I said it. Out of the water to the boat’s side came the lunging cavernous mouth of an attacking Hippopotamus Amphibius, intent on capsizing our crowded craft filled with shrieking passengers. Our joking captain pulled out a pistol, aimed right at the creature’s mouth and fired an echoing, smoky shot that saved us all. The hippo withdrew into the water and we continued on, eventually seeing, “the back of water.” It was thrilling!

I apologize for this joyous and completely inappropriate memory, but I was eleven, and it was one of the highlights of my day at Disneyland. There are still hippos on the Jungle Cruise, but the captains now fire into the air to scare them off, and that’s ok with me.

Who's writing this stuff?