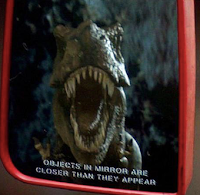 Dinosaurs! I’ve been a fan since I was a kid, so it was no surprise that my own children would one day be similarly enthralled. By 1992 our little family had grown to four, including an infant and a toddler. As they grew, they watched Barney laughing and frolicking on television, a purple people pleaser beloved by children and tolerated by their parents.

And then came 1993 and with it, Jurassic Park, the best dinosaur movie ever. As much as I loved Journey to the Beginning of Time, this was no Claymation shlock with classic Triceratops/T-Rex battles. No, these beasts looked real, and almost thirty years later, they still do. There was no way our babies were going to watch this movie in its entirety. Certain scenes were disturbing for adults.

Television in the early nineties had advanced beyond the handful of channels I watched in the 1960s, but it was far from our endless array of current choices. There was no streaming, no on-demand, and no DVDs. In fact, the first major releases from Warner Home Video arrived in December of 1996, with only four available titles. Netflix began mailing discs in 1997. Prior to that, since 1985 VHS rentals had been the stuff of the now defunct Blockbuster. Parents had a lot of control over viewing material.

It was inevitable, as our kids headed off to school, that friends would become the information conduit that led to requests to see Jurassic Park. After all, we were surrounded by lesser parents who made this possible for their children, now institutionalized and suffering lifetime derangement from exposure to graphic content at an early age. They were the same kids who were later gifted BMWs upon turning sixteen. We just lived in that sort of neighborhood.

No, my seven-year-olds would not be seeing an extinct monster eat a man, tearing him to pieces while reading a newspaper in a port-o-potty. It was gratuitous gore that added nothing to the story. And there would be plenty of time to learn that “objects are closer than they appear” in a rearview mirror without being educated by a nightmare-inducing, chomping, snarling monster.

Stepping back quite a bit, at age twelve I saved lawn mowing money for a Super 8 home movie camera. It was $75, a huge sum when saving fifty cents at a time. I later jumped on board the video camera bandwagon in the 1980s with a shoulder mounted model, tethered to a cumbersome deck that used full size tapes. I was also an early adopter of VCR technology. I purchased my first recorder in 1978. It was large and expensive, a Motorola console that I eventually programmed to record Cheers and Hill Street Blues on blank tapes that cost upwards of $25 each. The only feature film I ever bought was The Graduate, for $80. In those days, you re-used your tapes until they quit functioning, all of their metal oxides ground to dust, or tape wound around a capstan in a tangled, unsalvageable mess.

It was these two devices that I later used to make MY version of Jurassic Park.

It was no easy synchronization task, at least not a quick one, to start and stop the movie that was playing on Deck 1, while stopping and starting the tape that was recording on Deck 2. This was how I skipped over the horrific sequences in the original. There was no digital copy-guard in those days. I was free to do as I pleased with Spielberg’s fantastic special effects. My editing room floor was littered with all of the most intense chases and kills.

So the kids got to see the movie they’d heard so much about. They didn’t notice the little digital waver or question the nonsensical jump cuts of my edits. At least, not yet.

Years later when it no longer mattered, as TV matured, choices broadened and sequels became available, the original Jurassic Park appeared one evening during prime time. We all watched Jeff Goldblum cower in the back of a speeding jeep, with T-Rex in hot pursuit after snacking on the hapless port-o-potty man. 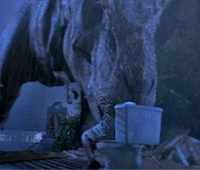 “When did THAT happen?” asked the kids. “Is that NEW footage?”

It was time to ‘fess up. I was the murderer of childhood film, or the savior of childhood, depending on perspective. Ultimately, I guess my own love of dinosaurs compelled me to create a watchable horror film for my little ones rather than deny them the experience altogether. And with that, I hereby confess to this crime, and to being a loving father or overprotective shield, depending on your viewpoint. But I can say, my kids turned out great, and visiting hours begin shortly. Go see your kid.

Who's writing this stuff?